"Je Ne Parle Pas Francais" means "I don't speak French." We had to use this phrase frequently during our stay in Canada. We will discuss this in more detail throughout this post.

It's April 1st and this is not an April Fool's joke that we are actually posting after 12 days! Sorry for the delay but we have been putting in some major windshield time. When we last left off we were in Montreal. Let's fill you in on the details of what we experienced.

We stayed at the Hotel Lovely for 4 days. We want to make sure you all get a glimpse of our awesome room so here is a picture. 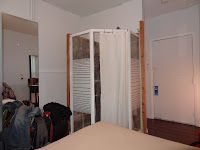 We really enjoyed our time in Montreal. Just a little fact, Montreal is the second largest French speaking city in the world after Paris! We needed some relaxation time so we spent one of the days lounging around at a park by the river. It was 76 degrees which was the warmest in over 60 years! We ate pastries from China town and packed a picnic lunch of Bahn Mi sandwiches (Vietnamese sandwiches). They were cheap and delicious. 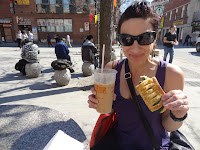 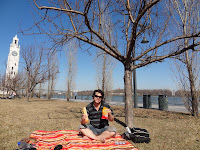 In an effort to save a few bucks we decided to pre-party in our room before heading out on the town for the night: 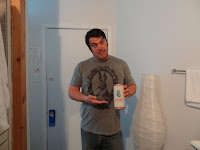 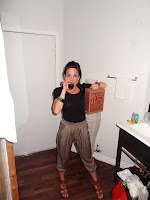 The next day we did some exploring through the city including a visit to Old Montreal and the Olympic Park . The 1976 summer Olympics were held in Montreal. Apparently, that was too long ago for the locals to remember because there weren't many people there. We toured the Notre-Dame Basilica and it was absolutely beautiful. 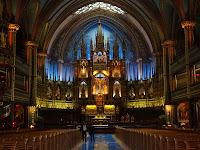 That day we rode the subway around and noticed is was extremely crowded. We researched that over 1.6 million people ride the subway but this seemed out of the ordinary. As we were walking through town, we noticed that one of the main streets was shut down by police. Our curiosity took over and of course we went to check out what was going on. To our surprise we were in the middle of over 200,000 people marching through the streets in protest. The protest was in regard to raising tariffs on tuition for the universities. It was quite amazing to witness! Protest doesn't seem like a fair word to use to describe this event because it was extremely peaceful with loud music playing, singing, and dancing in the streets. 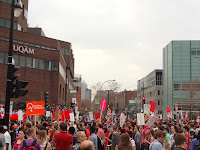 We woke up early the next day (March 23rd) and made our way to Quebec City. It was a 3 hour drive. We were amazed by how different it was in Quebec City than Montreal. We really had to use the phrase "Je ne parle pas Francais" during our time here because a surprisingly large number of people did not speak English. In Montreal they lead with French but easily transitioned to English. It was a little different in Quebec City. When we arrived in Quebec City we were exhausted from a lack of sleep in Montreal so we took a nap. A few hours later we heard a knock at the door and a nice local man with a cartoon-like mullet told us that we had left one of our bags next to our truck for hours! What is wrong with us? We were so tired that we left one of our important bags next to the truck for 3 hours! Thank goodness for nice men with mullets! We will forever remember him and never judge a mullet by it's cover.

That night we explored the beautiful old town: 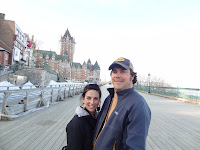 The next day we met up with a fellow CouchSurfer by the name of Stephanie. She was so wonderful and we spent the whole day with her. She showed us Montmorency Falls, Orlean's Island and Jean Larose Falls. Montmorency Falls are taller than Niagara Falls! 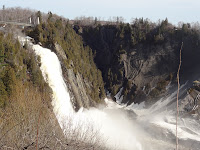 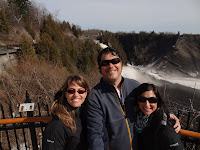 We ate real maple syrup from a maple syrup farm in Orlean's Island. Stephanie parked her car and we hiked down to Jean Lacrose Falls right off the side of the road. At first we were not sure where we were going because we were hiking through snow but to our amazement there were beautiful falls at the end of the hike. We felt really lucky to be explorers for the day and see things off the beaten path. The best part is that we gained a new friend in the process. 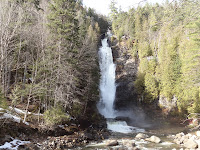 Later that night we finished our trip by walking around Old Quebec City again. We are going to miss this beautiful place! 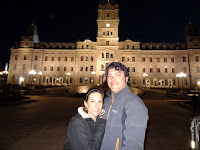 We left the next morning at the crack of dawn so we could make a return visit to the Canadian side of Niagara Falls without the fog. The mission was a success! 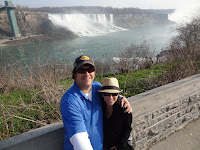 From the time we left Quebec City to when we stopped to sleep in a truck stop parking lot we had logged over 1,100 miles in one day! After 4 hours of amazing reclined front seat sleeping, we saw one of the most beautiful sunrises we have seen on this road trip in Kentucky. We tried to get a picture on our camera but it was such a fleeting moment that it may be best left in our memories. We made it to Georgia and spent the next 4 days hiking in the mountains (more like hills compared to Colorado but beautiful nonetheless), taking winery tours, having lunch with Leanne's good friend, Jamie, and climbing Stone Mountain in Atlanta. Doug and Tracey (Leanne's brother and sister-in-law) were awesome hosts in Georgia and we had so much fun. Spending time with family is always special. We were sad to leave and will miss them all dearly!!! 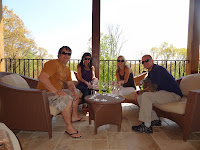 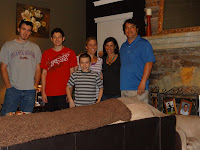 On Friday, March 30th we were on the road again...destination New Orleans! Apparently, there is this big basketball tournament that happens in March? They call it March Madness? The Final Four was being hosted in New Orleans and because we had not seen or heard the news in over a month we had no idea it was being held there. It truly was March Madness and we had to stay in a hotel 30 miles outside of New Orleans. We had a blast seeing all the blue and red clad fans! The best part about this stop was that there was a FREE Black Keys concert and we are both huge fans! 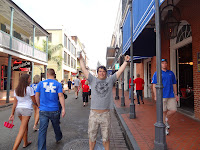 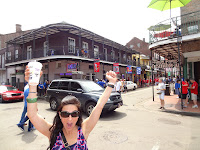 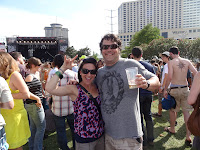 Did anyone notice that guy with the awesome sun tattoo on his back in our picture at the concert? Pretty sweet!

We are now in Houston visiting Michael and Erin (Leanne's brother and sister-in-law). This time we promise to update sooner than 12 days because we are leaving for Seoul on the 10th. Sorry for the longest post in the history of posting. We hope you were able to read this entire post without falling asleep!

As always, thanks for following!