Not Lost in Translation

It’s April 17th and we are sitting in Shanghai airport. We just left Seoul and are on our way to Australia but we have to tackle a 10-hour layover first. We are not going to be able to post this until we arrive in Melbourne because we have to deal with “The Great Firewall of China.” We are unable to access our website or any type of social media while in China. We found out that you can leave the airport for the day (less than 24 hours) without a visa but we weren’t prepared to leave. We didn’t want to risk missing our flight to Melbourne so here we sit! Since we have so much time until our flight leaves we are going to reflect on the memories of our wonderful trip to Seoul, South Korea.

Our flight schedule to Seoul:

While waiting in LAX we met another Josh (awesome name) making his way to Taipei to visit his family.  He helped us understand that when traveling on China Air you just have to claim a spot in line and wait until the counter opens to check in for your flight.  Throughout the course of the night we spent time enjoying conversation. He even waited for us at the Beijing airport to make sure we knew how to transfer to our next flight. He is a great guy and meeting him just reaffirms the bond of travelers.

We crossed the international dateline so we slept for most of the 12- hour leg to Beijing to battle the jetlag. 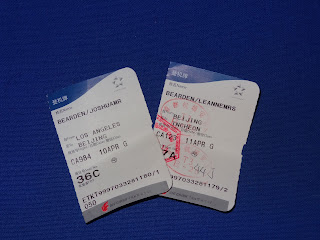 We landed in Seoul around 11:30 am on April 11th.  It was a weird feeling to lose a day but we will gain it back slowly by traveling west.  We decided to cash in our hotel reward points to stay at a nice hotel for the first night. We were in desperate need of a shower but did not dare go to sleep for fear we would not wake up until the next day. We were on a mission not to succumb to jetlag.

Seoul is quite amazing with a population of over 20.5 million people in the metro area and has one of the most advanced subway and mass transit systems that either one of us has come across during our travels.  We spent the first night exploring the neighborhood where we were staying for the night. We found a “food court” and feasted on local cuisine. 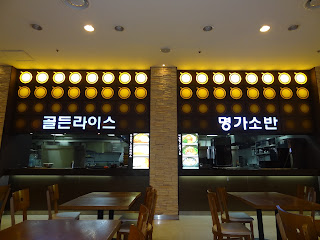 We checked out of the nice hotel and made our way to what was going to become our new home for the next 5 nights. We are not sure what the proper word would be to describe this place…maybe a dorm? 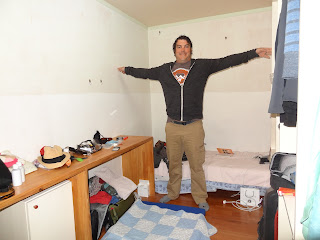 Nothing like using co-ed showers in your 30's. Josh would like to stress that the showers were OK but the bathroom was a different story. After several days, we broke down and snuck into a Westin lobby to use the facilities.  Ultimately, the $25 per night price tag was worth it because it allowed us to splurge in other areas.

Our converter did not work so we spent the night tracking down an Apple store in the neighborhood where Josh used to live called Itaewon.  Check out the video of Josh reminiscing his high school days in Seoul. All of our videos are linked under the Video tab.  Josh wondered if his memories of Itaewon would have been best kept in his heart as he had mixed emotions by the change.  On one hand the advancement that has occurred over the past 20 years is amazing but the rustic feeling of the neighborhood has somehow been lost.  If you recall in the "About Us" Josh broke his hand playing a video game in Seoul. One night while out on the town, Josh came face-to-face with evil video that broke his hand. He confronted it, forgiven it, and is moving on with a free mind. 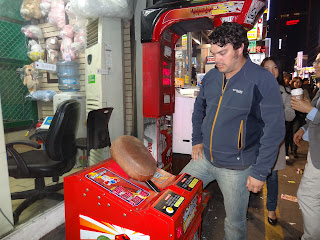 The Reasons Why We Love Seoul

It is hard to even describe just how genuine Koreans are. They have an overwhelming interest in Westerners traveling to their country. Everywhere we looked there were smiling faces of people wanting to become our friends and asking about our travels. 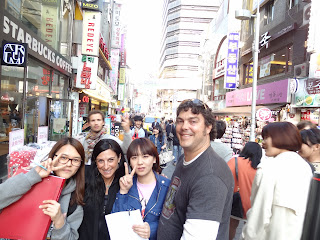 We stumbled across a place called Beer Denver so of course we had to stop in. 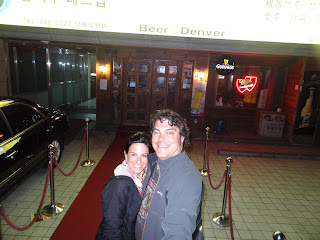 We ordered a bottle of Soju which is a traditional Korean rice liquor. We muscled the bottle down because it is not the tastiest of liquor drinks. Remember when you had to dissect an animal in school? It pretty much tasted like the formaldehyde that the animal was stored in but somehow a little worse.  A group at the bar said that Soju is a way to a Korean’s heart and that we won their hearts by drinking it. They proceeded to buy us another bottle. We couldn’t be rude so we were forced to finish it. Well, Josh mainly finished it.  (That turned out to be an ugly night and a harsh start to the next day for us both). 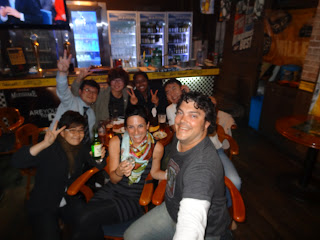 Independence Park – a park that was dedicated to Korean martyrs that tried to gain independence during Japan’s colonization of Korea.   We were blown away with the depth of history between Korea and Japan.

Side note: They must have been really short back in the day because the doors to the grounds were Leanne sized. 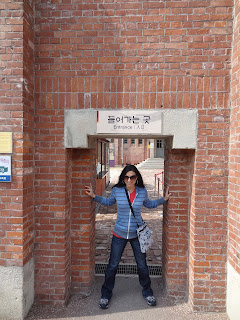 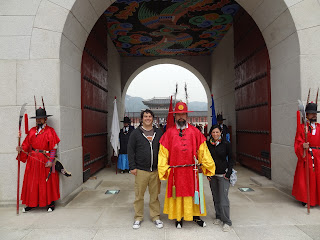 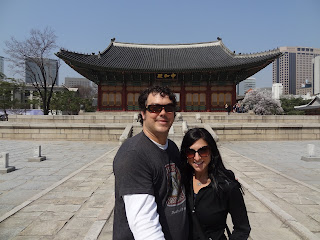 Check out the video of the changing of the guards! (under the video tab as well)

Hanang Park (along the Han river) 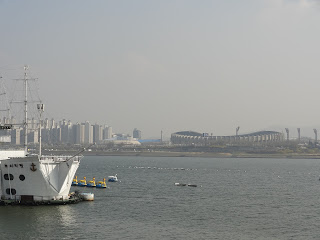 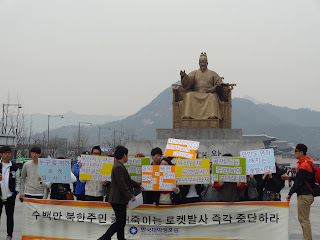 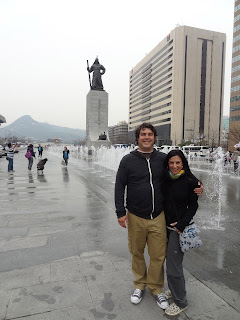 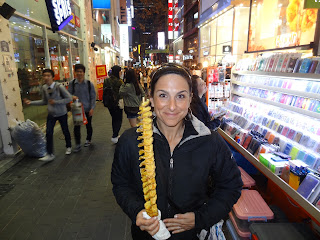 We visited local markets. One particular market was not for the faint of hearts as full slaughtered pigs hung from the ceiling as well as many other cultural products. We kept our pictures PG rated by just taking a picture of the outside. 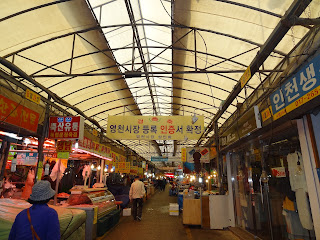 No, it’s not actually called the worm hole but that’s what it felt like. At each stop, there was a brand new adventure waiting for you at the top of the stairs. 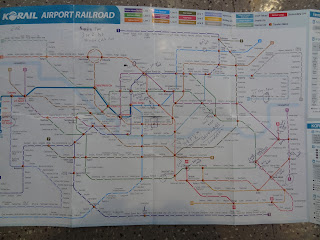 One stop would have huge multi-million dollar department stores another would have vendors selling crappy clothing on the streets and yet another one would have bars and street food as far as the eye could see. 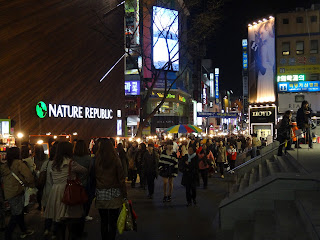 You could spend years exploring every stop and still have surprises waiting for you at the next stop.

One of the highlights of our trip to Seoul was meeting our new friend, Helena. We not even really sure how we met. We were outside our “dorm?” and suddenly in a full conversation with someone we had never met. She said she would meet up the following day to show where to eat good Korean BBQ. She was not planning on staying but she and her dog ended up having lunch with us. 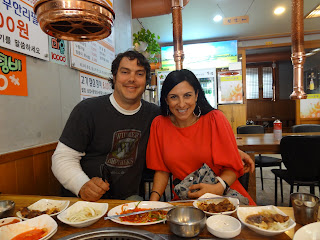 We enjoyed each other’s company so much that we decided to spend the day together. We visited one of her favorite areas of town called Sinsa. While walking around, we met this guy! 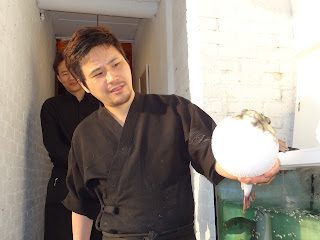 Maybe the blowfish inspired us, we are not entirely sure but Helena knew about one of the largest fish markets in Asia so we hopped the subway on a quest of seafood!  What a cultural experience! There were hundreds of vendors selling every kind of seafood imaginable and the smell was unbelievably pungent that you had to be there to fully appreciate it. 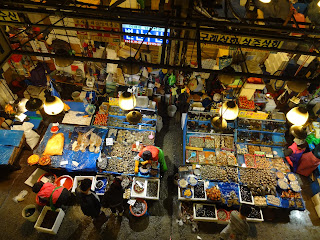 Helena helped navigate the way by translating with the vendors and even arranged for the food to be cooked afterwards. This was a sushi experience like none other.

We have a great video documenting the experience so check it out. 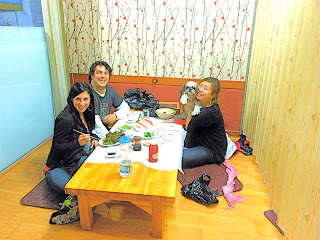 Helena is truly an unforgettable friend and we know our paths will cross again.

Overall, Seoul greatly exceeded our expectations. This was Leanne’s first time traveling to Asia so she was a bit apprehensive because of the difference in culture and language.  Josh went to high school in Seoul and already loves Korean culture and now Leanne does too.  Seoul will always have a special place in both of our hearts.

Now  for some traveling down under!